Who are the Consortium? 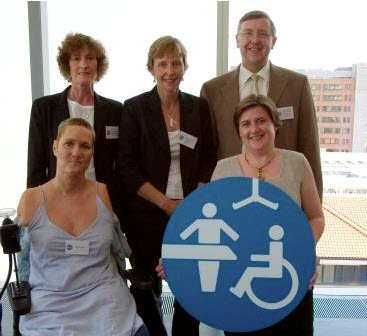 The Changing Places Toilets campaign was started by the late Loretto Lambe, founder and CEO of PAMIS (Promoting A More Inclusive Society), a voluntary organisation based in Dundee who  support parents of children and adults with profound and multiple disabilities (PMLD). In 2003 PAMIS produced a video showing how several parents had to change their  child on dirty toilet floors ,or in the back of mobility vehicles. This video included an interview with Loretto and Lord Rix from Mencap setting out the problem.

PAMIS worked in partnership with Mencap, who had appointed Beverley Dawkins as their National Officer for PMLD. Beverley was also supporting families with similar needs across the UK and who had also highlighted major problems in away-from-home toilets.

In 2004 Martin Jackaman from Nottingham City Council had also realised this was a problem for Day Services staff, as well as families,  so he set up a project team to design a toilet that would be fully accessible. The project team targeted plans for the new public toilets that were due to open in Nottingham in July 2006 and, using the video, he successfully persuaded the Council to include the design in those new city centre toilets.